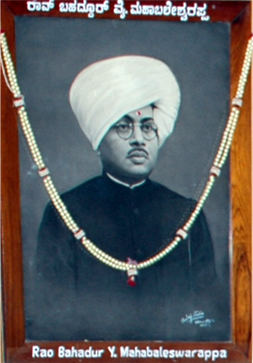 Being in the field of education, the sangha  identified in 1945 the necessity of a Degree College in Bellary region to cater to the needs of the people in Higher Education. As a founding  father came forward then active president of the sangha Sri. Yechi Reddy Mahabaleshwarappa with all  enthusiasm and earnestness to swim against the strong current of the madras government policy of neither giving permission  easily for private colleges nor the government itself opening new colleges and to establish a college. As he was then the President of the District Board and reputed public  figure through the state for his able, efficient and honest administration, making use of his good offices succeeded in collecting three lakhs rupees from donors. On the personal request Sri.Y.Mahabaleswarappa seeking the permission to open a college, the vice-chancellor of Madras University Dr. Lakshmana Swamy Mudaliar came to Bellary, conducted a survey , held discussions and granted permission to open the colleges on the condition that the required norms must be fulfilled within three years. Thus took Veerashaiva College  its birth in 1945.

Publish the Menu module to "offcanvas" position. Here you can publish other modules as well.
Learn More.